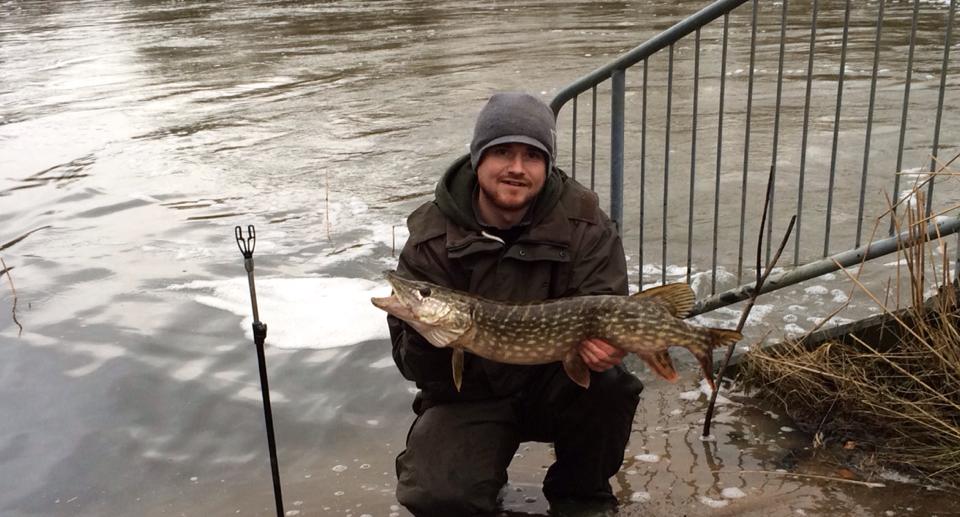 Read below to see Sean’s take on his day piking managing just one before the storm hit.

‘With a fresh amount of rain the few days before hitting the bank I had a restricted few spots to try at the local pits. Walking around the pits I decided to fish a section with a sluice as the oxygenated water I would hope might hold some fish. Looking out across the water I could see a grebe working the far side of the pit so decided with the wind behind me to use a drifter float with a small roach dead bait suspended underneath. I would vary the depth on each drift to find the fish.
I was fishing with a friend and we had tried all sorts of methods and a few swims either side of the original spot for nothing to show for it. The cold water from the rain maybe putting them off. It wasn’t until just before the hail and thunderstorm approached and the sky’s blackened that the drifter right across the pit sailed under, that feeling as a pike angler is hard to beat. As the bait was quite small an early strike is essential; a lost fish is better than a deeply hooked one. Winding down I felt the solid resistance of a fish on the end. Fishing at this medium distance it’s imperative to be using braid so there is no stretch in the line. In the fast flow the fish all be it nothing huge put up a good account of its self.
Safely in the net I could see that the pike have obviously been feeding well lately as it was a stocky but short fish. Quite a few leaches on the fish showed it must have been sat up for quite sometime so the searching method was about all that might have produced that day. Having unhooked the single size 4 semi- barbed treble a quick photo and the fish was back on its way hopefully to grow some more. One fish and a very wet and worried angler later after the storm it was a day to look back on with a story to tell. Let’s hope the water drops soon.’

WE ARE NOW STOCKING A RANGE OF FRENZEE PRODUCTS.